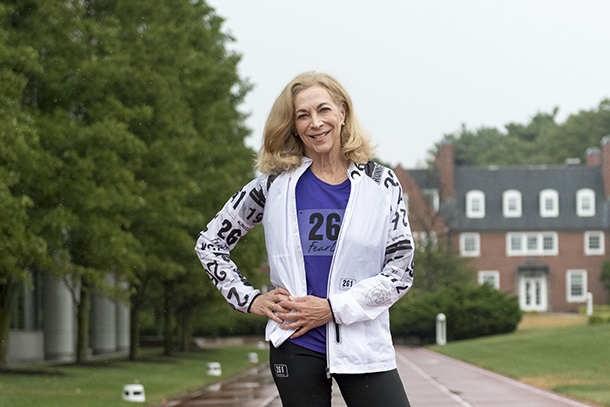 Why I am Running the 2017 Boston Marathon - By Kathrine Switzer

Who could imagine it will be 50 years ago next April when I first ran the Boston Marathon and an angry race director grabbed me at the two-mile mark and tried to rip off my bib numbers and throw me out of the race?

That day changed my life and  millions of other women’s lives, too.  Sometimes, it feels like it happened yesterday.  And indeed, as  I scroll back over our relentless work, our unflagging belief  and our many accomplishments, I can see that  what we have done in just 50 years is phenomenal:  we’ve created a social revolution.   58% of all the runners in the U.S.A. are now women, and this trend is growing globally, because of one important reason:  women are transformed by the empowerment that running gives them.

I’ve run for 57 years.  Running has given me everything: my health, career, confidence, creativity, religion, love, freedom and fearlessness.  Running has given me MYSELF, my empowered self, and without a doubt the experience in the 1967 Boston Marathon accelerated that feeling.  “I’m going to finish this race on my hands and knees if I have to,” I said to my coach after the official tried to eject me.  How did a frightened 20-year old girl have the guts to say that?—because she’d been running; she believed in herself and her right to be there.

And she believed in other women, in you.  “Why aren’t there lots of  other women here?” I  wondered as I climbed Heartbreak Hill.  “If they only had the opportunity, they wouldn’t be afraid to try”, the Universe answered back.

In the slog of a cold rain, with six miles yet to go, a  dream was born, and with hard work and a lot of joyful organizing, it’s come true.  YOU are here!  Running has transformed YOU, made YOU fearless also, and YOU in turn are empowering other women.

It was YOU who told me that my old bib number, ‘261’   made you feel “fearless in the face of adversity.”  It was you who wore it on your back and inked it on your wrist and helped me start a movement of fearlessness and now a non-profit organization called 261 Fearless that is dedicated to helping to empower other women.

And it’s you whom I’m hoping will be at the Boston Marathon start line with me in April, 2017.

We have your opportunity to be there, as part of our 261 Fearless Team, whether you are fast or slow, Boston-qualified or not.  Thanks to the Boston Athletic Association (BAA), who believes in our mission to empower women through running, we’ve been granted a good number of charity bibs.  Our team will enjoy a weekend of festivities including special room rates, lots of gifts, great Reebok gear, a super just-for-us gala pasta dinner, private busses to the start and a knock-out post run party and much more. But best of all, we will all stand on that starting line together, celebrating a 50th anniversary of a run that changed the world.

Many of you have been working hard but could not make that qualifying time; now you can apply with us for a bib and raise funds to join the 261 Fearless team.  We request a minimum amount raised of $ 7,261 for an invitational charity bib, well below the average amount raised in Boston.  If you have qualified and been granted a race bib from the BAA—congratulations!—you can also join us and enjoy all the team perks by raising $2,261.  We have all the support people to show you how to set up your CrowdRise program, teach and encourage you, give you your training schedule, and motivate you to make the experience of a lifetime happen easily.  You will be part of an amazing team who will be with you every step in the journey to the start line.

The funds you raise will go to setting up global 261 Clubs, training programs, a powerful communications network and events so that women, many in fearful places, are made fearless by your efforts.   In particular, we need the ability to bring our 261 Club model of social, non-competitive running to women all over the world; we know creating the community of running women transforms them, and we need to get our training and support team out into the communities who need and want a club the most.

Running transformed you, now you can help another woman feel the same.  Running has made the world a better place for women, and here is your opportunity to keep changing the world.

There is only one 50th anniversary of this moment in our lives.  THIS is why I’m running the Boston Marathon on April 17, 2017. Please join me for an unforgettable experience.