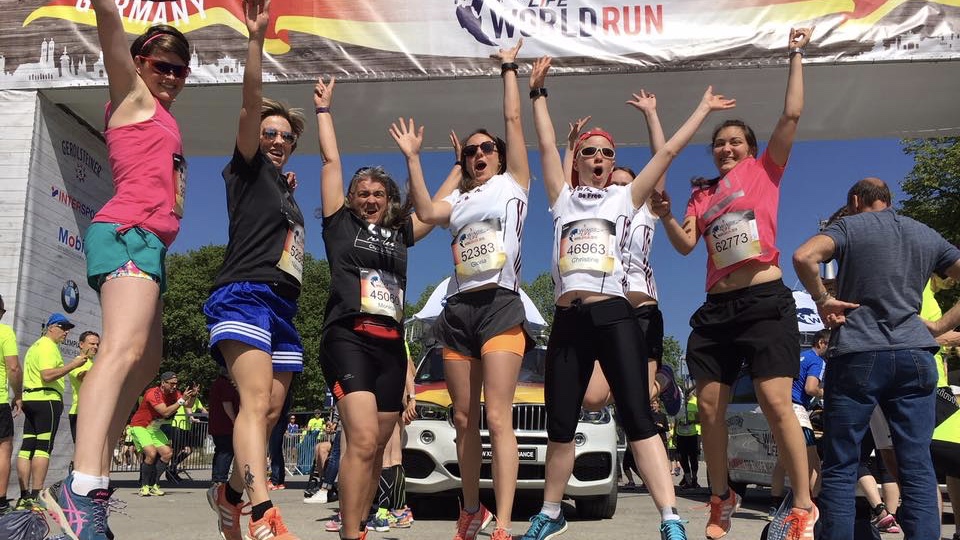 Many of our 261 Fearless members faced the challenge of running away from a moving finish line in order to raise money for those who cannot run themselves.

This year's Wings for Life Run took place on May 6th 2018. It is a very special run for various reasons: The run takes place in more than 30 countries simultaneously, it’s a charity run with 100% of entry fees going into research foundations dedicated to finding treatments for spinal cord injuries and paraplegia - and what makes the run particularly special is that there is no predefined distance to run. Everyone can join this race regardless of their fitness level or running ability. All participants start at the same time and thirty minutes later, the „catcher car“ starts its pursuit of the runners. It raises its speed at regular intervals and the race is over once the catcher car catches up with the runner. This very unique running event draws more than 100,000 from all over the world and in addition there is now the possibility to join the run virtually through an app. The principle stays the same as in the official races but the runners are being chased by a virtual catcher car. We’ve collected reports from clubs and members who participated in either the live or a virtual run.

At the end of the day, more than 3 Million Euro were raised by runners all over the world. By the way, the next Wings for Life Run will take place on May 5th, 2019.

261 Fearless runners from Germany, Austria and Switzerland participated at the Wings for Life run in Munich. The excitement before the race was big as it was a premiere for most of our ladies. After arriving at the Olympia Park where the run started from, the runners soon realized that this was bigger and more elaborate than anything they had experienced so far at other race events. Before the race began they went to get their bibs and took pictures with the catcher car in order to distract themselves from the task ahead of them. Then it was time to move to the designated starting block and to wait for the start signal. It took some time until more than 10.000 runners got under way, but everyone was a good sport about it. The participants were a wild mix of ambitious marathon finishers, beginners and wheelchair drivers.

The actual run started after about 3k when the field began to divide along the course. Everyone found their own pace and a fearless partner and the wild chase began. At 7k the first busses that would take the runners back to the Olympia Park after being caught by the catcher car began to show up. No one wanted to think about the catcher car at this point, but suddenly a horn began to announce the approach of the car at 8k. The reaction to the horn was immediate and explosive - everyone was trying to squeeze the last few meters out of their run and the field sprinted off. Gone was the laid-back atmosphere, everyone was loud and exuberant.

While some of the runners decided to complete the 10k after being caught, others got on the busses immediately in order to return to the Olympia Park and to wait for the other runners who were still fighting hard. Each bus made an honorary round through the stadium and every runner who got off the bus was welcomed like a winner by a group of drummers and the applause of those who were already back. Our team members waited in the stadium until they were complete again, took some more pictures and received their medals. No matter how far each of them ran, they all enjoyed this experience. Our fearless ladies are already looking forward to next year’s event and hope that the 261 Fearless team at the starting line will be even bigger then. This is a global running event, just like our organization is a global one. Therefore it’s a great opportunity to get together and run, whether it’s at the same place or connected through an app run. 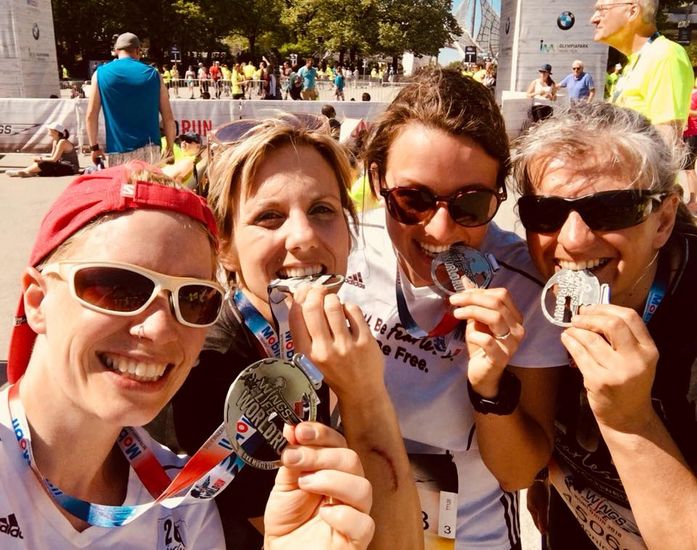 The 261 Fearless Club in Klagenfurt rather spontaneously organized an app run. 16 runners showed up to be part of this experience, some club members but also fans of their Facebook page among them. The app run made it possible that our runners from Austria could be part of this charity and to do something good for others through running. The runners met at noon, got a short briefing about how the run works and then they took off at 1 p.m. sharp, smartphone in hand or in their pockets.

The course ran along the northern shore of Lake Woerthersee where the runners turned around after 4k and ran back towards Klagenfurt. The runners became more nervous with every passing kilometer - according to the app, the catcher car was coming closer and closer. The runners formed small groups in order to run away from the car at different speeds. But no matter how fast they ran, at one point - sooner or later - the catcher car caught up with every single one of them. Yet everyone was very happy and proud of their individual achievement for this good cause. Just like with many Club activities, fun was the main goal at this event as well. 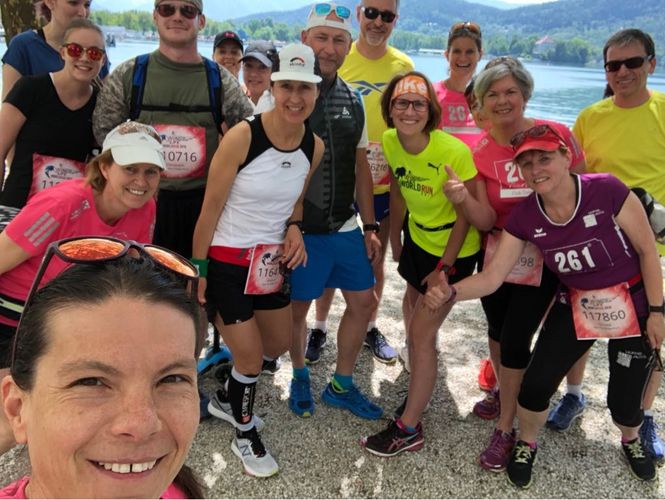 Three weeks ago, the 261 Fearless Club set up a Wings for Life App Run in Palmerston North, New Zealand on behalf of 261 Fearless New Zealand. The global start time of 11:00 UTC translated to a 23:00 start time in New Zealand.  Therefore the organizers weren’t sure anyone would come and join the event at that hour of the night, especially considering it was a Sunday night, and many would have work and other commitments the following day.

It turned out, there are plenty of fearless people in Palmerston North because 25 people - friends of 261 Fearless and members of the wider local running community - showed up to run, walk and wheel laps of the Athletics Track that night. The atmosphere was that of fun, fellowship and food (many brought baked treats to share!). Everyone took part in their own way and at their own pace, and once overtaken by the catcher car, many stayed in support of those still running. The final runners managed to complete 22-27km (!) before being caught - seriously impressive.

It seems people enjoyed themselves too, as there's been talk of 'next year' already (is it too soon to book a live band to play in the middle of the field?!).  The club leaders are extremely grateful for the support of the local running community and pleased to have been able to raise funds for such a worthy cause. 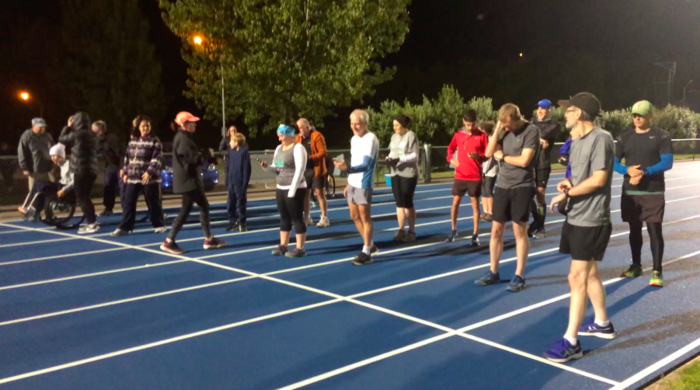