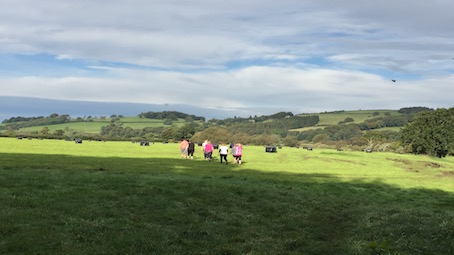 We're delighted to present our newest 261 club in the stunning Lune Valley in the North West of England.

Coaches Nicky and Juliet were super excited to launch the club and held the first session on Friday 22nd September. "It's the perfect spot for a club because there's a tarmac cycle path as well as off road running" said Juliet. "It's also quite private which is great for women who might feel a bit self-conscious as they take their first running steps".

11 women from surrounding villages joined in the first session. Abilities and ages varied with the oldest being Juliet's mum who at age 73 is the first to admit that she feels hopeless at sport having been put off at school. "The furthest I have ever run is five metres to my car. I just came along to have a try. It was so much fun, being with a lovely crowd of women. I found it a challenge and I don't know if I can ever see myself as a runner but I really want to go again next week".

As expected there was lots of laughter! Name games to get to know each other, some running technique drills on the (slightly boggy!) grass and then a run/walk along the cycle path. Over a good stretch, plans were made for a meet up at the local tea rooms after next week's session. You could feel the buzz and warmth in the group. It's onwards and upwards for this new club. We can't wait to follow their journey. Welcome 261 Club Lune Valley!