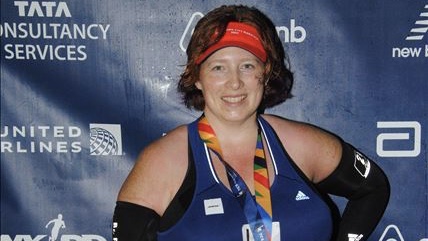 Liz's inspirational story: Her life was turned upside-down after a severe injury - read about one brave woman's fight and her passion for running.

"There's a whole world out there of acceptance and encouragement, regardless of gender, age, shape, weight, or speed. Running is for everyone."

My name is Liz, I live in Hamilton, Ontario, Canada and I am an x-ray and mammography technologist, meaning I'm the person who takes the xrays and positions for the mammogram for breast screening.  I was full time for years, until I suffered a head injury, and after a few years of unsuccessful attempts to return to full time hours, I have chosen to drop to a part time position and after a year, I am feeling a lot better.

I have been married to my husband for 12 years now, and we had dated for 7 years after meeting at University before tying the knot. I am a mother of two active boys, ages 6 and 8.  Both play a number of sports, including soccer and hockey, swimming and ball hockey, and have even participated in children specific triathlons, which is where I was inspired to learn to run.

One night a couple of years ago I was working a busy night shift at my hospital, when I stood from a crouching position into the xray tube. Next thing I know, I was on the ground, in pain. I called for help, and was seen in emergency. I remember having blurred vision for up to 3 months, and suffered from dizzy spells and severe headaches, light and sound sensitivity, an inability to focus, and high distractibility, to name a few symptoms.  I was highly irritable because of the increased sensitivity to sound and visual movement. And having two young boys, then 2 and 4, made it almost impossible to get any rest or peace.

By the end of the summer, I was suffering from anxiety and depression, that hadn’t yet been diagnosed. I was frustrated with my inability to return to normal, and was tired of faking my feelings day by day. I didn't enjoy anything. I was mostly numb, and I cried, A LOT. And during a camping trip with my family, after an intense moment, I had some very dark thoughts. This is when I realized that I needed help.

Over the next couple of years, I was involved in testing that apparently proved that my brain function was "normal", even though I still couldn't multitask or do things the way I used to be able to do pre-injury.  I was diagnosed with Post Concussion Syndrome, along with depression and anxiety, for which I began taking medication, and attended an Intensive Outpatient Program, during this course, I learned the value of self care.

After taking an online seminar, I looked into more creative self care activities, and fell in love with painting.  I'm not sure if it was the focus on self care, or time, or leveling out the dose of the medications, but I finally started to come around after a year, to where I could enjoy things again, and smile sincerely, and genuinely care for other people again. And I stopped hating myself, because I had learned that perfection isn't achievable, and I am enough as I am...and I believed it. And that's when I decided I wanted to stop being a spectator in my family life, I wanted to become an active participant and engage with my husband and kids again.  And that in order to do that, with their activity levels taken into consideration, I needed to lose weight and become active myself.

I joined a learn to run clinic at my local running room in February 2016. They train in intervals, so we started with running one minute and walking 2 minutes for a week and continued to increase the running interval by a minute a week, running 3 days a week, up to 10:1 intervals.

Running has been amazing for me for many reasons. One is that it allowed me to really practice and understand the SMART (Specific, Measureable, Achievable, Realistic and Timely) goal setting that was taught in the Intensive Outpatient Program (IOP) that I had attended. Running has also given me the necessary white space that I need to clear my head from the day's stresses. It's like meditation, where you focus on the breath and redirect when the mind goes elsewhere.I also practice repeating affirmations in my head. "I am strong. I am confident. I am fearless." To name a few.  By doing this I have built my self-esteem and confidence every time I run.

I ran my first 5K the following May.  And I loved it. I had fallen in love, become addicted to running, and the runner’s high. I trained for a 10K that fall, and in January 2017 set out to train for my first half marathon, the Niagara Falls Women's Half Marathon. This is when I was introduced to Kathrine Switzer, and her book, Marathon Woman. I was inspired by her story, by her courage and strength, and her willingness to make opportunities for women to run...around the world. She didn't sugar coat it...when she ran, it wasn't always enjoyable and fun and easy, but it was always worth it. She inspired me to want to do more.  Maybe, just maybe, I could run a full marathon after all.

I applied to the call for applications for the New York City Marathon with 261 Fearless in the spring, and had my interview.  But I didn't get chosen at that time.  And then, the first Friday of September, I got a call from the 261 Fearless charity team...someone has been injured and had to pull off the team...would I like to fill the spot?  I was elated and terrified!  Which resulted in me saying yes.  I trained hard for 2 months and I busted my butt to get the fundraising done...with the help of my run club.

New York was amazing!  It was like a dream...like an alternate reality. I really can barely believe that I was there and it all happened.  The team was amazing. The events throughout the weekend were so much fun, and so empowering.  The first half of the marathon was pretty "easy". I was slower than Kathrine and her group, so I went my own pace and enjoyed the environment and the crowds cheering. After half way, I started to panic that I had to do it all again. The crowds became overwhelming, and I was over stimulated, and having troubles staying focused. But I kept putting one foot in front of the other. At one point in time, and lasting for a long while, it hurt more to walk than to run.  But I finished, with a team member...we did it!  I loved the coziness of the ponchos, and the post-race nutrition bag.

261 Fearless is special to me because I have experienced the empowerment that running can offer, and I love the idea of sharing it with the world. I wish I could share this feeling with my family and friends, and I wish I had experienced it sooner.  There's a whole world out there of acceptance and encouragement, regardless of gender, age, shape, weight, or speed. Running is for everyone. Cut out the tendency to compare, for comparison is the thief of happiness...just do your thing and have fun, while at the same time getting stronger and more fit. My experience in New York City was magical! And I have 261 Fearless to thank for it.  I barely have words to describe the gratitude I have for being on the team, and running my first marathon in New York, as a part of 261 Fearless.