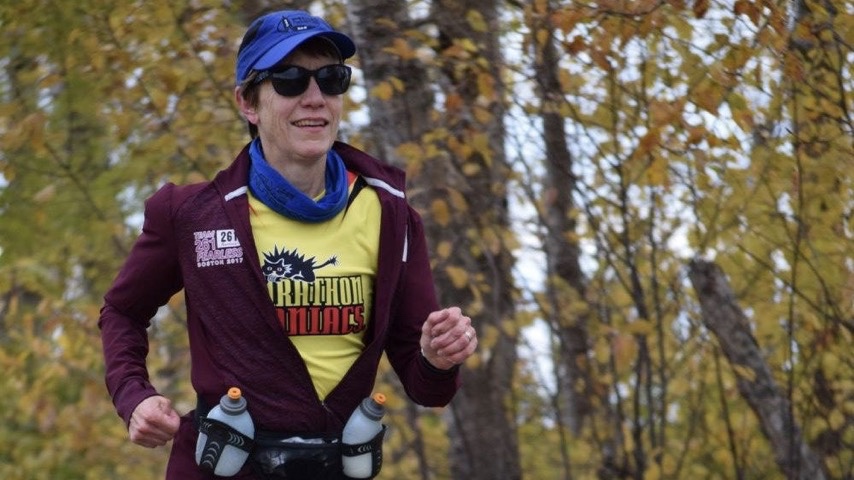 Pat's running story: "If you had told me then that forty years later I’d be an avid marathoner and a 261 running coach, I would not have believed you."

"I was discouraged from running much by the then much-touted running myths saying it was not 'lady-like', you’d damage your uterus, get saggy breasts, develop unattractive big muscles, ruin your internal organs, etc."

Growing up in St. Paul, Minnesota in the 1960s and early 1970s, I was not particularly athletic though I enjoyed swimming and skiing. When the first (largely male) running boom took off in the 1970s I did a little “jogging” but was discouraged from running much by the then much-touted running myths saying it was not “lady-like,” you’d damage your uterus, get saggy breasts, develop unattractive big muscles, ruin your internal organs, etc. I enjoyed watching part of one of the first Twin Cities marathons from the sidelines and thought that was something I’d like to do one day, even though all the runners I saw were men and I had no idea what completing a marathon would take. When I was teaching English in France between college and graduate school, a fellow instructor and I got into a little trouble when we went running on the school’s track one night after hours and were sternly told this was neither permissible nor dignified. So much for that short-lived fitness attempt!  If you had told me then that forty years later I’d be an avid marathoner and a 261 running coach, I would not have believed you.

Over the years I have enjoyed studying, working and travelling throughout the United States and abroad. By the time I was in my 40s, I was the executive director of the Oberlin Heritage Center, in Ohio, a position I held for 22 years. Juggling parenting, a demanding professional life, and caring for an elderly parent left little time for myself. I was suffering from frequent bouts of bronchitis and asthma. I finally decided that frequent doctor visits and medications were tiresome and that I should try harder to take better care of myself and to develop a healthier body and lungs through exercise and diet. I started exercising on exercise machines in my basement in the wee hours of the morning when my two children were young.

After a few years, I got tired of exercise machines and I headed out one morning to try running, all bundled up hoping that no one would recognize me or worse yet laugh at me. Slowly I got hooked, became more confident, and enjoyed my own pre-dawn running explorations of the town’s streets, parks and paths. Once I took the time to exercise regularly I found that I felt better, had more energy and could better deal with the stresses of the day. I gradually became an avid runner, learned what I could by reading Runner’s World and running books, and became a student of the sport.

It never occurred to me to enter a race until my husband one day mentioned that I was running far enough regularly that I should consider doing a small 10K run near our family cabin in northern Wisconsin where we retired and now live. I had to ask how long 10K was. My son and I signed up for the 2008 Bark Point 10K. I thought any race would be intimidating and intense. Instead, this was a fun, low key community event for runners and walkers of all ages and fitness levels. That race along what is now one of my regular running routes by Lake Superior has become a special favorite. I’ve repurposed the quirky ceramic door knob “trophies” made by a local artist that I’ve received from the race receive now serve as a rack for my collection of medals from races all over the United States and abroad.

I had the good fortune of first hearing Kathrine Switzer speak in 2010 at one of the first half marathons I ran. Her upbeat presentation, can do attitude and an array of women fans in the front row wearing black Marathon Woman shirts were all truly inspirational. A few weeks later, I stopped in at the expo for the Towpath Marathon outside Cleveland, just to check it out, the day before the race. I walked in the door, found the info table, and was told they had one bib left for the marathon, so I took it! My husband was out of town so the next day I drove myself there, ran the race amidst gorgeous fall colors, and finished feeling on top of the world, along with a few sore muscles. I had initially thought finishing my first marathon at age 55 would be a one and done thing. But I got the bug and happily completed my 32nd (and first trail) marathon in Uganda a few months ago at age 62. Though I am now retired from my career as a museum director I have certainly not retired from being a runner. I enjoy having more time for running, yoga, road biking, cross country skiing, kayaking, and all that the Northwoods and Lake Superior have to offer.

Each marathon I’ve done has presented different experiences and to me preparing for and running a marathon is as much a mental challenge as a physical one. I finished the 2013 Boston marathon a few minutes before the first bomb exploded. Being that close to such devastation was of course terrifying. With distance and perspective, the experience made me all the more appreciative for the gift of running. Running the 2014 Boston marathon, a year later, was an overwhelming, joyful experience with the streets packed with enthusiastic spectators shouting, “Thank you for running!” and runners like me replying “Thank you for being here.” Running the 2017 Boston marathon as part of Team 261 Fearless with Kathrine Switzer and women from around the globe was an extra special marathon experience like no other. Marathon Woman is one of my all-time favorite reads and I’ve given and lent copies of it to many friends and family members over the years.

It took a leap of faith and a measure of fearlessness to launch the new 261 Fearless Club TC South Shore club in Herbster, Wisconsin (fewer than 261 residents) in a sparsely populated area along the beautiful South Shore of Lake Superior. Would anyone come? Imagine my delight when 12 people from near and far, most of whom I’d never met, came for our first trial run! We do our workouts in the town’s historic, log Herbster Gym when the weather outside is too frightful.  Not unlike the original settlers of this logging, fishing and farming community, our 261 Fearless participants have spirit, bravery, and determination and what the Finnish pioneers and their descendants call “sisu”. We are proud to be the first 261 Fearless Club in the State of Wisconsin and are grateful to be a satellite of 261 Fearless Club Twin Cities, led by Emily Ertel. 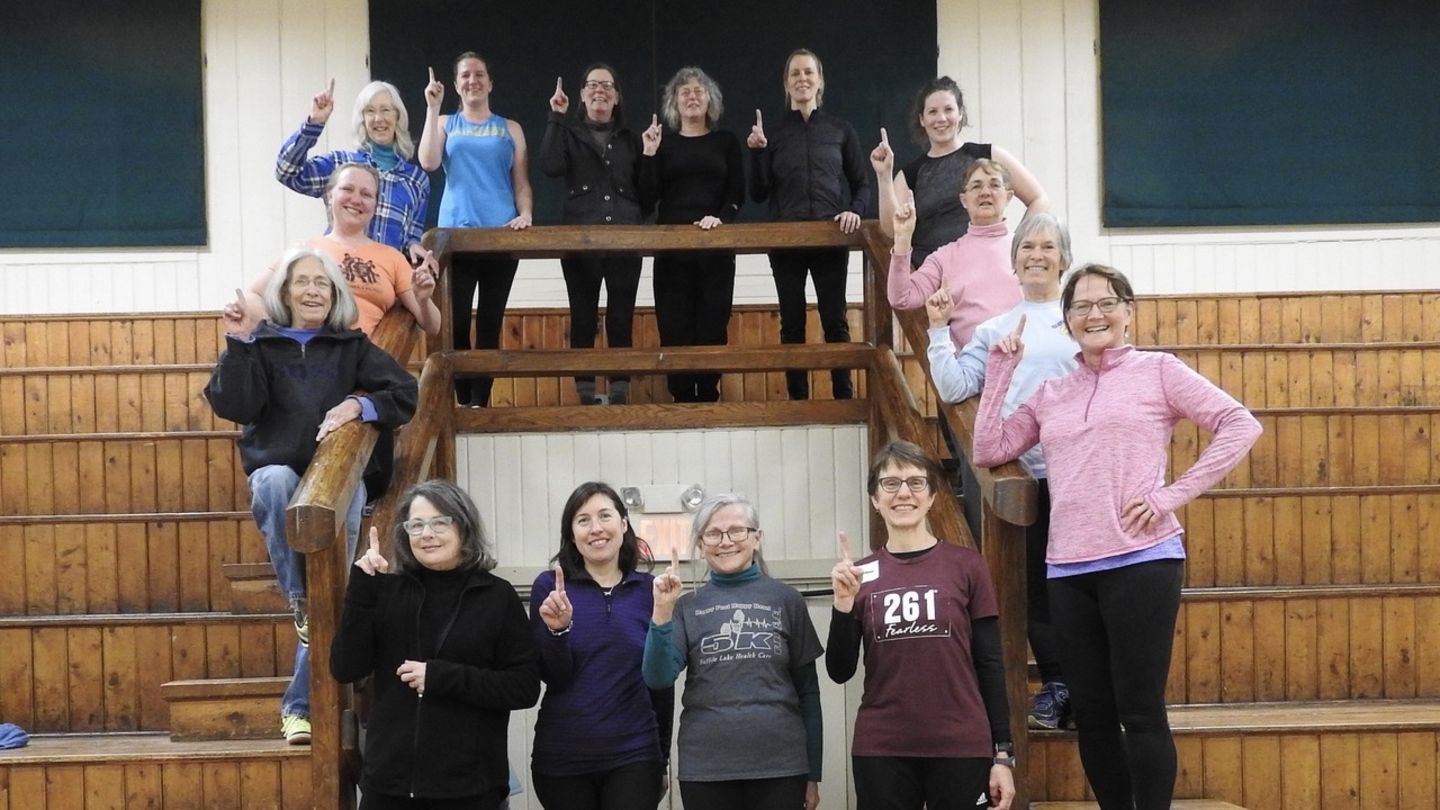 Sharing the joy or running through 261 Fearless is a gift and honor. Nurturing and inspiring women to walk, move and run in our supportive, structured meet runs is fun and motivating. The enthusiastic participation and smiles of those attending are very gratifying. I am grateful to 261 Fearless for helping me do my part to build a worldwide community of women runners.