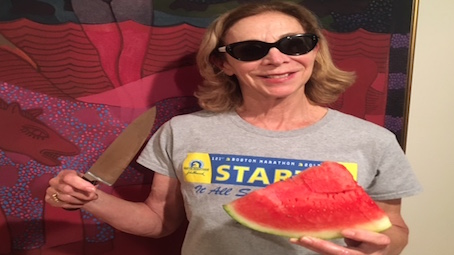 There is Always a Surprise Gift

This story about my last run demonstrates perfectly why I believe running always gives you more than you give it. By Kathrine Switzer

By the time the houseguests had left, it was 10:30 on Sunday morning.  It had been a late night the night before, with plenty of good wine, laughter, and for me, a much-needed break from work.  But I knew today was an imperative long run and now the mid-August sun was blazing.

I thought about putting off the run until late afternoon, after the sun dropped a bit, but I felt good now.  There are no guarantees that I would feel really good later; it had been a crazy week and I might easily become tired, and besides, something else might happen to thwart the run.  That’s what usually happens; you say you’ll get some work done before the run, you open your computer and there is a crisis.  Maybe you can do the laundry and get a run done, but if you open your computer, you’ll never get a run done.  I stuffed the guest-room sheets in the washer, pulled on my sneakers, and forced myself to think positively and creatively.

I don’t like running in the heat but I do like running with as little on as possible.  I don’t like carrying water but I love eating cold watermelon afterward when I’m parched.   I get a little nervous about ramping up the distance on a hot day, but if I’m going to be ready for New York I have no choice.  I’m running out of training time.  And the fact is:  I love—I categorically LOVE-- the long run.  It gives me back my soul, for better or worse.

So, wearing the skimpiest of shorts, top, and no underwear—a kind of wear-test of some new adidas gear that would look great on Claudia Schiffer but was, shall we say, marginal for this 70 year old and definitely too revealing for me on public roads, I hit the rail trail near my house.  A perfect place, shady and populated only with Sunday bikers and just a few other runners.  I stashed my water and thought I’d do 20 minutes out and back and get water every 40 minutes for the duration of a 2-hour run. I prefer just going out forever and coming back, or making a giant loop, but I hate carrying water so much in any form that I’d rather do out and back.

My choice of the rail trail was perfect.  A soft surface is slower, but it is the best when you are extending distance for the first time in awhile.  Your knees and legs don’t need the extra impact right now.  We can hit road surfaces later, a gradual re-entry.  Best for me, though, was the shade, and once on the trail, a breeze I’d not felt before was there. I would get it in my front and on my back, excellent practice for New York as you never know which way the wind might come.  When it is a tail wind on a hot day, you get hotter and like Boston this year, it can really bite you.  This is when water is important-- down your back as well as down your throat.  I felt smug that the run was already giving me several practice opportunities.

I just let myself slip into it, starting gradually and easing my way into a jog that got my rhythm back, and let my mind go on cruise control.  I had passed the point of the ‘To Do” list (this is always 18 minutes of reminding myself of the work I need to do later in the day, or be prepared for first thing Monday morning, a kind of writing it down on the cyber-space notepad.  I laugh at myself doing this, because for sure at the end of a long run I can remember nothing.   I’d like to think my mind is having a therapeutic cleansing sluice, but I think the reality is that the brain is like a too-full trash can and the run makes all the paper on the top of the bin blow away).

I looked at my watch—25 minutes already.  Gee, I hated the idea of turning around just for water and decided to push it to 30 minutes, making my first watering at 60 minutes.  At 29 minutes, however, I was suddenly very thirsty, not a good sign because I’d be running thirsty for 31 more minutes, but as I said, I’d had a couple of glasses of wine the night before, so I was already a little dehydrated.

Then a really amazing thing happened.  Along the rail trail, someone had created a portable Sunday brunch stop for the bikers.  I couldn’t believe it!  Right there in a woody grove in the middle of nowhere was a kind of gypsy caravan with the side up, and a guy was making lattes and frittatas.  People were sitting on lawn chairs; there was even an umbrella table and jazz music coming from somewhere. I swear it was like an oasis in the Sahara.  Not being shy, I asked the cook if I could beg a cup of water from him.  He smiled, handed me a paper cup, and pointed to a big orange Gatorade jug.  I said, “I guess I’m not the first one to ask you, but I’m surely one of the most grateful!”

I drank a cup and poured another down my back and on my head.  Now I could just keep on for the next 30 minutes after all.  I held onto the cup and on my return, an hour later, I stopped again, did the same thing, and arrived at the 2-hour point to drink my own stash of water.

It sounds like such a simple story, and it is.  But it proves something I always believe about running: whenever and wherever you run, you’ll get a bonus.  Sometimes, something really special, that makes the run even better than you could have expected. Running always gives you more than you give it.