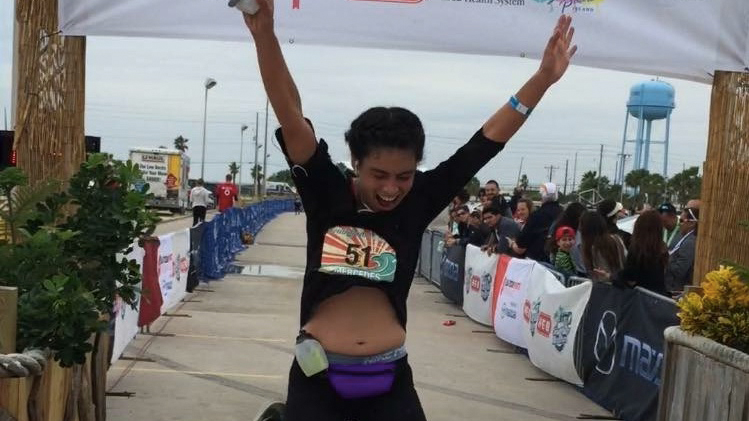 “Running helped me over come postpartum depression. I want to be a supportive role model in my local community and I believe that being a part of 261 will just be the beginning of that goal.” Meet our 261 San Antonio Charity Team runner Mercedes.

My name is Mercedes, I am 30 years old. I was raised between México and California, always being a socially awkward kid. I went to different schools up until we moved to Texas and by then I was already in high school.

This has been the only place that we did not move around from so I consider this my home as I know the same people I went to high school with.

I live in a small town deep in South Texas. Growing up I never played sports. I sucked so bad at them that people hated playing with me and by people, I mean my family. In high school, I tried to play soccer but I stuck at it that I never played on the team and I eventually even gave up on showing up for practice. I always had self-esteem issues and I was also overweight, heck I grew up overweight! My dad called me “panza” that means belly in Spanish.

After high school, I lost a bunch of weight but not in a very healthy way. I ate a lot of chemical food and ate everything that said diet, fat free and light. This caused me to have low energy and I still was not happy in my own body. I started to run with my sister but it was nothing I took too seriously. She paid for my first 10k; I was totally not trained or prepared for this and I found out the hard way. When I felt that I was going to die, I cheated and I cut the course to get to the finish line as soon as I could.

I got pregnant from my high school sweet heart at the age of 26 and I went from independent working woman to a house wife. Now, there is nothing wrong with being a house wife but I think that tremendous change was a major cause to my postpartum depression. I never felt like I did not love my son or that I wanted to harm him. I just felt I was not good enough to be a mother, I was dependent on someone else, I had a challenging time breastfeeding and I was, in my head, not the best person for this job. There was a period of time where I would not even leave my room, I was not eating, I was a zombie who woke up to nurse and change the baby. My husband was away due to work and what was supposed to be a month assignment ended up being a 3-month assignment; that was hard on me. I soon realized that I had a problem and I needed to do something about it. Of course, I was too ashamed to admit or say the things in my mind so I looked for other sources to help my mental illness. I remember a friend telling me that in other countries before a patient is prescribed antidepressants they are first asked to change their diet and incorporate exercise into their daily routines and by doing this the number of prescribed antidepressants is extremely low compared to the USA.

My son Maximus has always liked the outdoors, as a baby walking him in the stroller was such a joy to him and even more so in his baby carrier. Even today he enjoys his stroller rides and his baby carrier and he is now four years old! I wanted to bond with him to make up for that time I was depressed. I also started to learn American Sign Language because one of the many benefits of teaching a child ASL is bonding between parent and child as you teach the baby to sign. I started to take him on a stroller ride around our neighborhood. This was so hard for me at first because I had so many stupid thoughts going round in my head and ignoring those was a difficult battle.

I am currently training for the Rock ‘n’ Roll San Antonio Marathon. Running has rewarded me in more ways that I can imagine, I hope to be able to be a role model not only for my son but for other women, they too can be fearless.