I KNOW my focus should be entirely on the TCS New York City Marathon. It’s only a few days away! But lately my heart and plenty of my mind has been on the streets of Boston again. by Kathrine Switzer

The reason I’m thinking Boston is because we are over-the-moon excited about again receiving some invitational race bibs from the Boston Athletic Association for the Boston Marathon!  AND, you can bet the 261 Fearless Team and concurrent celebrations will be in full force next April 2018!

For those of you who ran with us in 2017 for my 50th anniversary run, you will be pleased to know that the money you raised has been largely earmarked for the propagation of 261 Fearless Clubs, our core mission. We all know that when women get together and run they get fit, share the secrets of their souls and become fearless.  We are steadily growing globally, empowering women one step at a time.

Now, once again you have an official opportunity to join us in running the 2018 Boston Marathon because just last weekend we made the bib announcement when a group of us 261ers came together in the Boston area. Let me tell you about that:

It was a beautiful autumn weekend in Boston, and on Saturday morning Karen Dinger, passionate leader of the 261 Clubs Greater Boston (and soon to be 261 Master Coach) brought her club and a few prospective members to adidas RunBase on Boylston Street, near the finish line of the famous Boston Marathon.  It was the first time we’d all been together since we ran the marathon in April, and let me tell you we shared some memories, especially when our team photo was up in lights on the large in-store plasma screen! 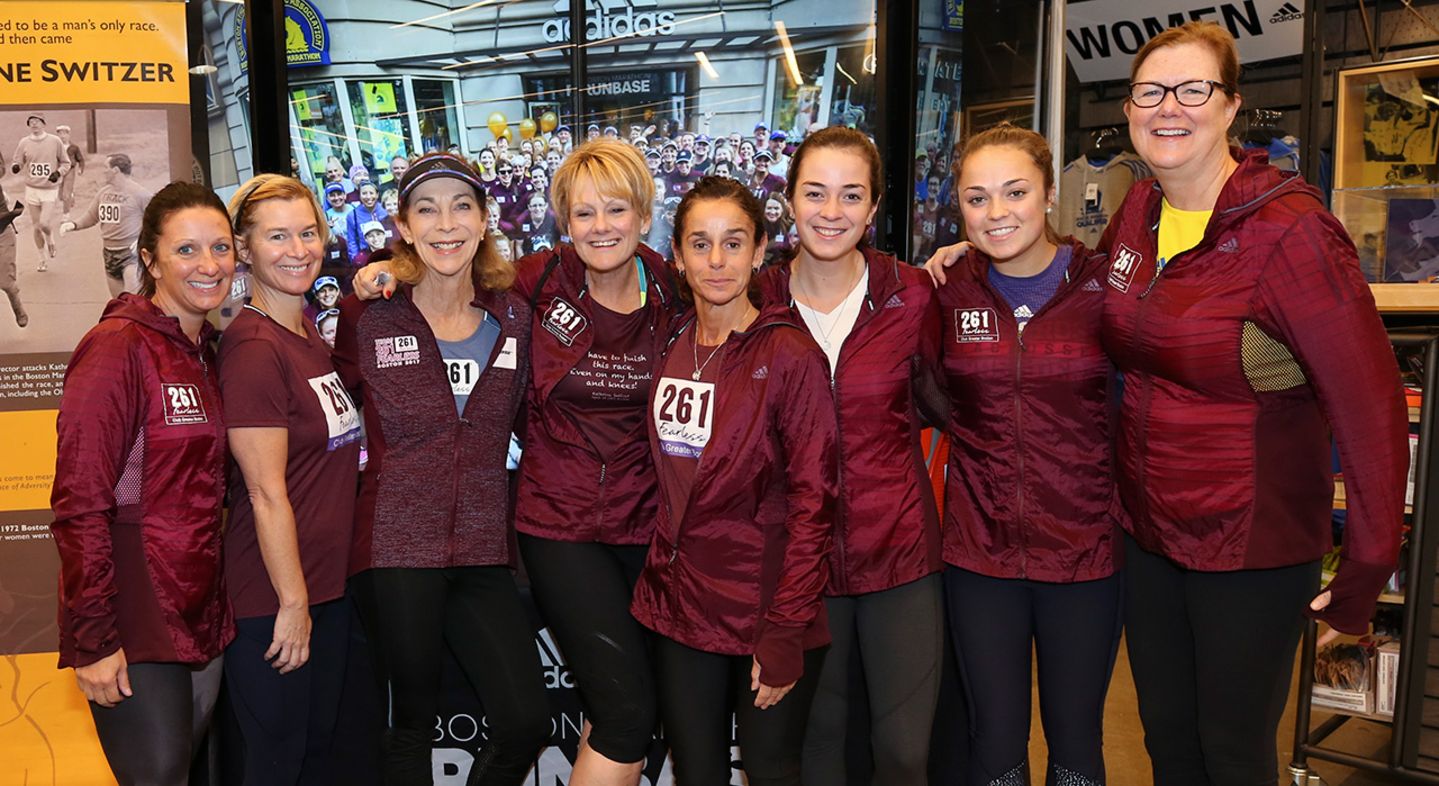 We were also there to show local media what our purpose for 261 clubs is, how a club run is done, and to create more clubs in the Boston area, which is one of the goals and requirements if we receive BAA invitational bibs.  So, with a TV camera following us, out the door we went, knowing coffee and fresh fruit awaited our return. 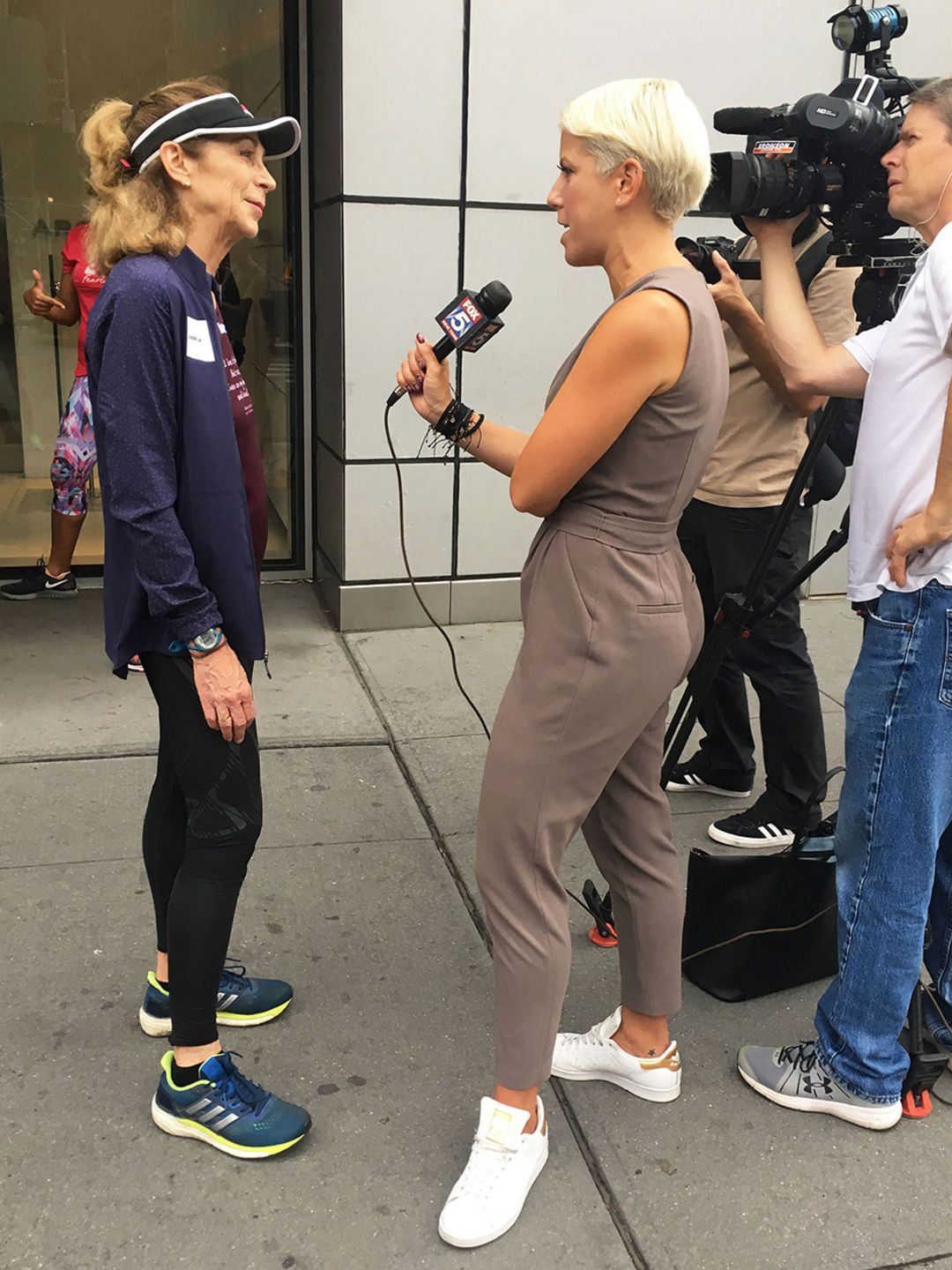 It was one of the most fun runs I’ve had in a long time! The pressure of New York faded when I got a silly fairy headband to wear when we did a shuttle run relay to warm up.  We ALL wound up wearing goofy headbands and I don’t think we laughed so hard all week as we headed into the beautiful Boston Gardens, which is like being in a painting. 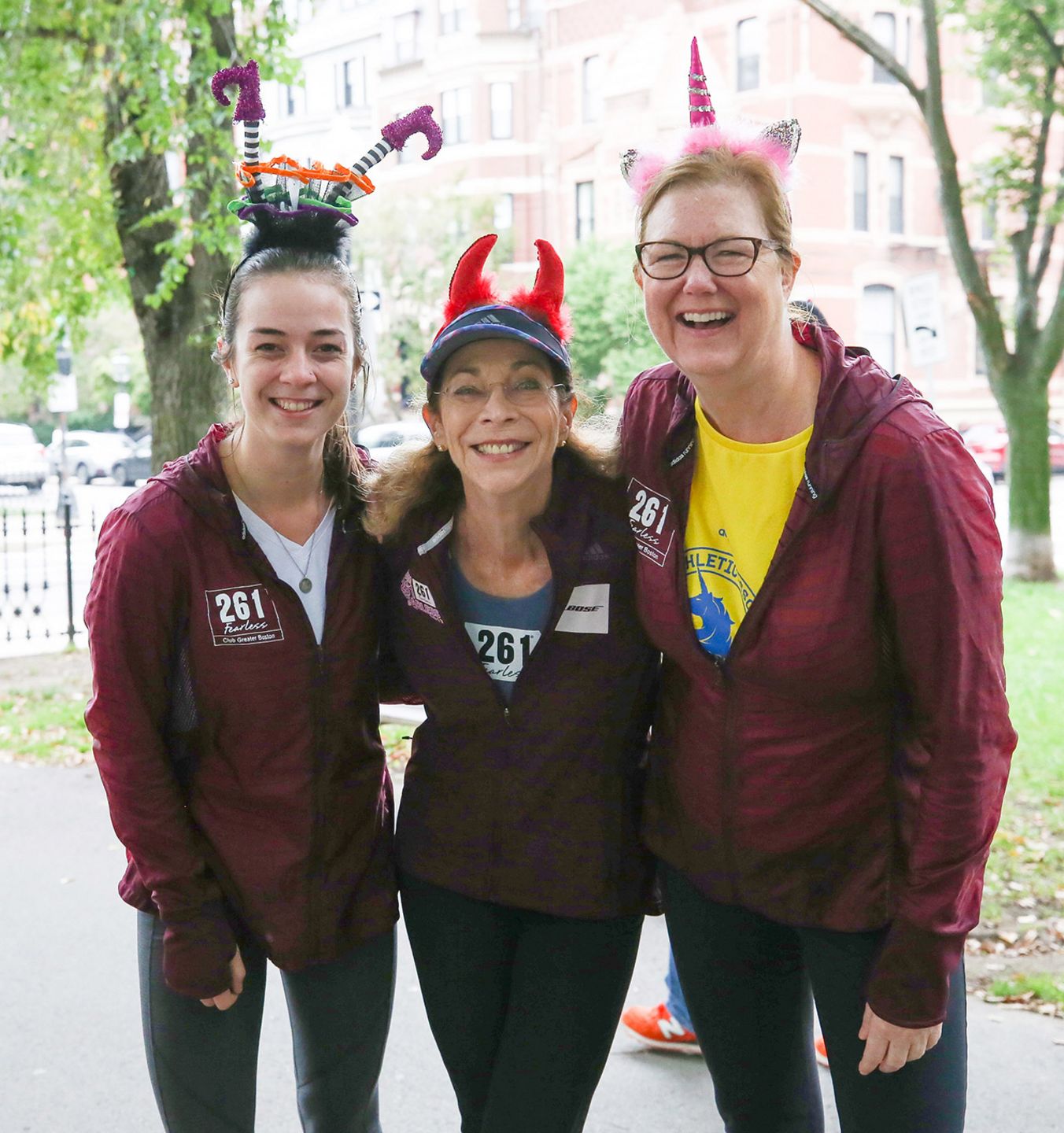 Then who did we literally run right into? —None other than Tom Grilk, the CEO of the BAA, the most important guy in Boston Running!   He was as delighted to run into us, as we were him.  This is a very good sign, I thought! We ended our run on the famous Finish Line of the Boston Marathon on Boylston St.  Are we excited about next April 16 or what?!  Then it was time for a nice breakfast back at adidas RunBase, and as you know, you share the secrets of your soul when you run together, and you share your enthusiasms and determination when you have coffee together.  Women who came along out of curiosity about 261 Fearless left with action plans to start a club, run Boston, and for sure they left with a lot of new friends. It’s what 261 does best. 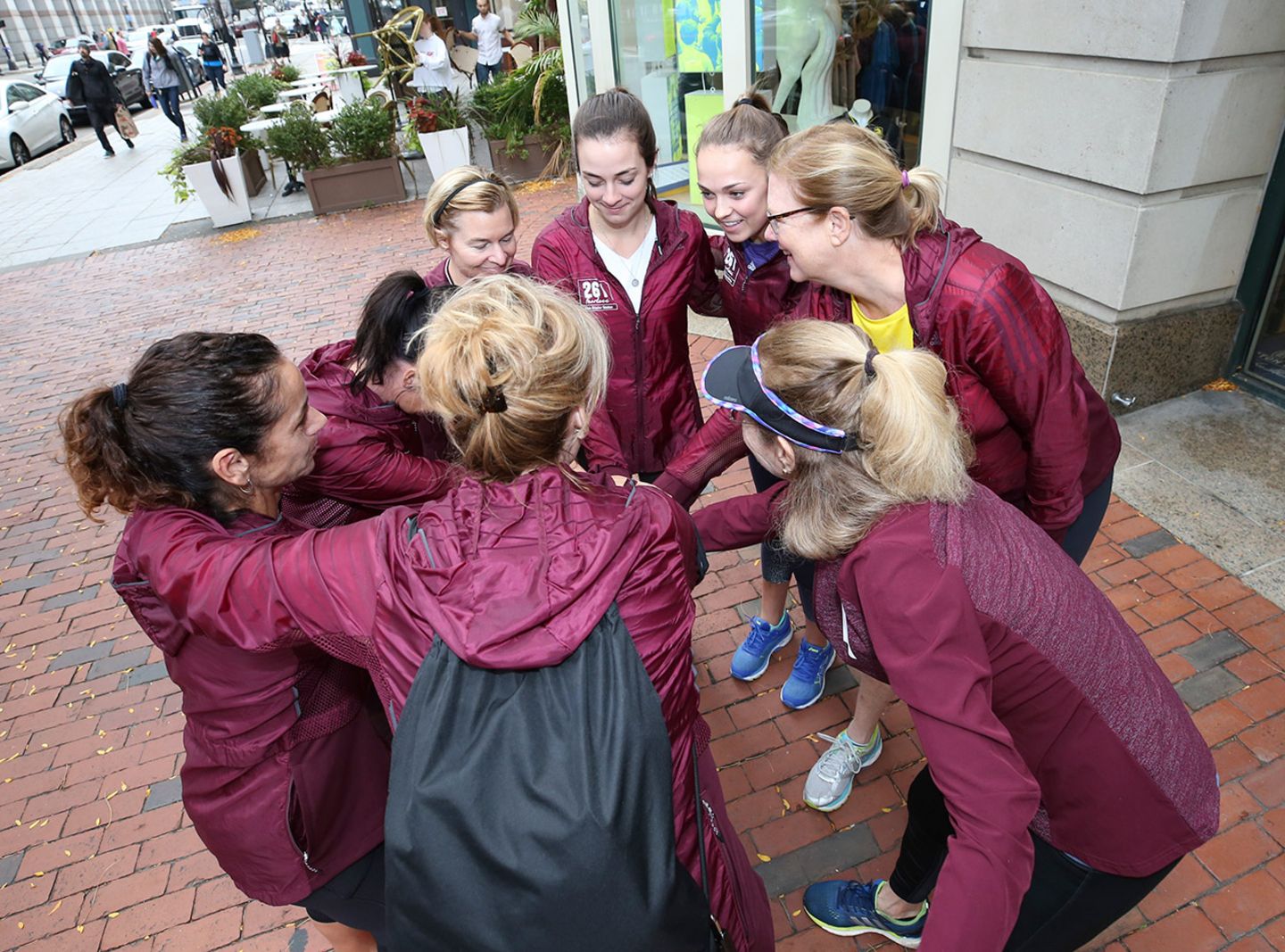 The next day, Sunday, was a day I’d dreamed of for the past seven months. I wanted 261 Fearless to do a formal Thank You to Hopkinton, Massachusetts, the town that proclaims: “It All Starts Here.” Certainly for the 2017 Boston 261 Fearless Team, it all started there last March! That is when this village turned on all the taps for us as we planned one of the most significant, ambitious, and memorable journeys of our lives.

117 women and seven intrepid men formed team 261 Fearless, and our fledgling organizing team was going to put it all together to make it happen. We had wonderful support from the BAA, from Race Director Dave McGillivray and from Susan Hurley of Charity Teams, Inc. but as you can imagine, we were still reciting our 261 Fearless mantras with great fervor!

But it was in Hopkinton where our fears were finally put to a manageable level.  Thanks to introductions provided by one Timothy Kilduff, a passionate marathoner and creator of the Hopkinton-based 26.2 Foundation, everyone from the chief of police to the chair of selectmen to the historical society to the chair of the Hopkinton marathon committee reached out to help us.  Local architect Pete Thalmann and his wife Karen, long supporters of youth sports (girls ice hockey in particular) quietly offered up Pete’s beautiful office on Main Street for our 261 staging area.  This particular piece of generosity allayed our greatest fear: how could we stay together, warm and dry for those early morning hours before the start?  Pete was a savior!

And on race morning, it all came together. They were all there, and along with doing the millions of tasks required on race morning to serve nearly 30,000 runners, somehow they all had time for us. We began our journey of a lifetime, and we all finished.

Personally, there are a few places in the world that have a spiritual resonance for me, and Hopkinton is one of them, so when I stood before many of the people who had long lived in this beautiful town and thanked them on behalf of 261 Fearless for what they had contributed to us, to me, and to the whole world for the last 50 years, I felt like a pilgrim who had, at last, reached peace.  Appropriately, we called the event “Passing the Torch” because we admonished the young people present to continue the amazing progress--the social revolution! -- We women had achieved in the last 50 years in the marathon. 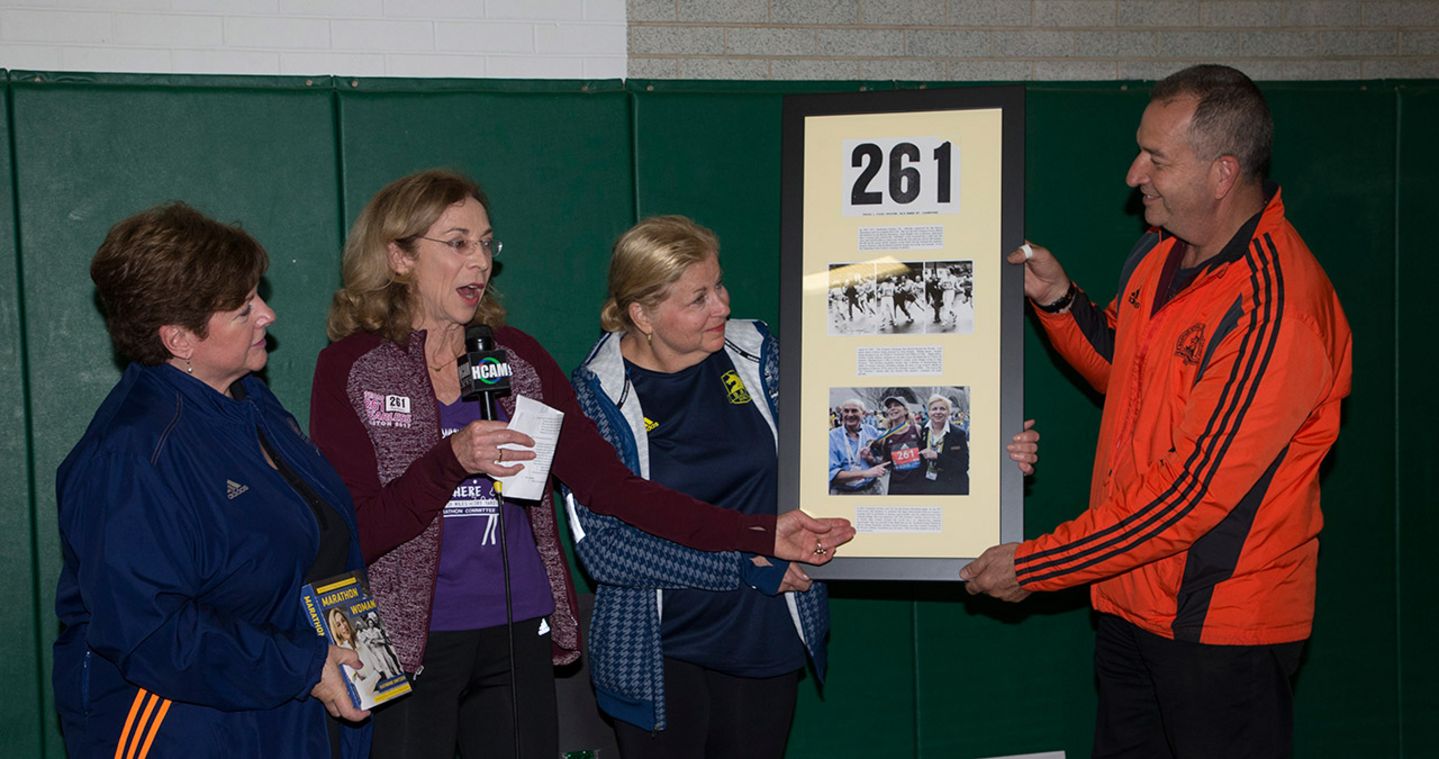 And then, we ran together, young and old, swift and slow, and inaugurated the new cross-country course through the beautiful autumn woods.  How perfect it was for me as the first woman to actually officially enter the race, now at 70 to run with townspeople and the sleek captains of the cross country squads who were not far from the age I was when I broke that barrier in 1967, and for all of us to be joined by Joann Flaminio, the first woman president of the BAA in 125 years. 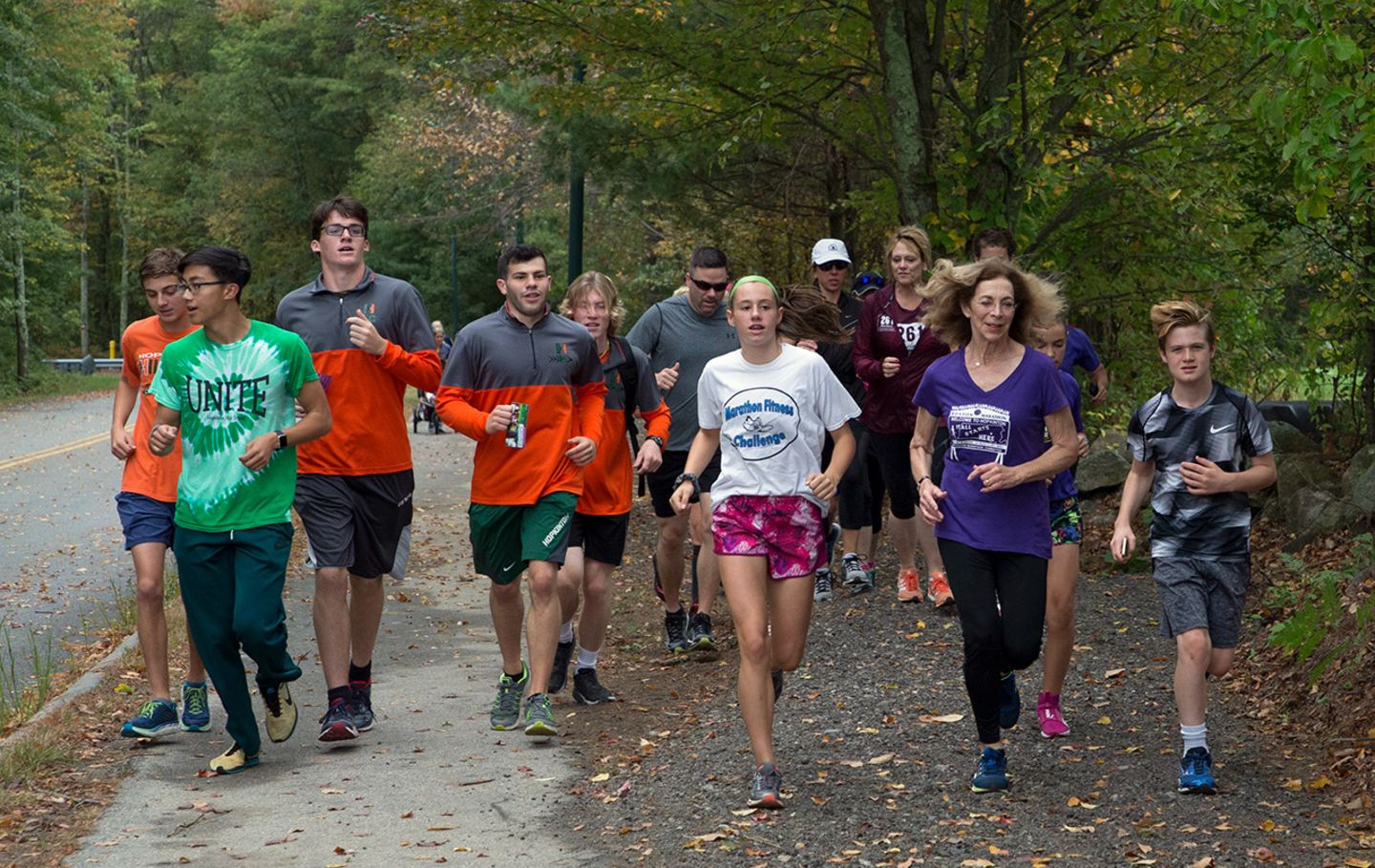 It was an historical turning point, to visualize what the next 50 years could look like and to imagine the role this town and these people would be playing in that future.